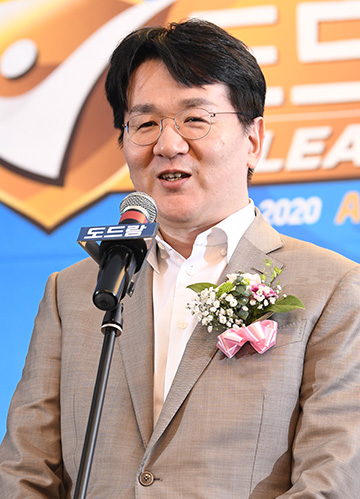 V-League fans, who loves the Volleyball!

Volleyball season has came back. As time goes by interest about V-League is growing.
V-League which tries to change every season expanded the number of women's league
games from three to five times a week, so we made that many fans can feel the
attraction of women's league on TV and on the field.

Also, V-League will have a short break due to the participating the Continental Olympic Qualification tournaments,
which aims to advance to the Olympic together with men and women.
We wish good luck of the national team’s performance and we will promise to return to more dynamic and energetic V-League after the break.

These changes and efforts were able to made only because of our fans' love and V-League sponsors.
The title sponsor, the Dodram Amphibious Cooperative, and host broadcasters KBS, KBS N, SBS Sports, and many other official suppliers will be joining us in the Dodram 2019-2020 V-League.

We will continue to work hard to become a V-League that will impress and entertain our fans.